As an Amazon Associate, I earn from qualifying purchases. This post may contain affiliate links. Read More

This recipe for semolina porridge is also ideal as a snack or dessert, which becomes a real comfort meal thanks to the creaminess.

This coconut semolina pudding in vegan is a sugar-free snack, which is also great as a small snack before sport or just when the small appetite grabs you.

With this recipe, I'll show you how you can still enjoy your childhood semolina pudding without having to use dairy products. And with this great semolina recipe you get a creamy pudding alternative.

I will show you how you can prepare the semolina porridge as gluten-free or wheat-free. The best thing about this recipe is that it is prepared sugar-free and is naturally sweetened.

Have you always wanted to prepare a vegan semolina porridge, but you never really knew how? Here I have a super creamy flavorful recipe for you.

The following ingredients are contained in this dairy-free pudding. The exact amount can be found below in the recipe card.

I don't know about you, but I love everything creamy. And that goes for this creamy vegan semolina pudding and it is not difficult to prepare this super creamy.

The only thing you need is coconut cream, the separated part of the coconut milk.

I place the coconut milk in the fridge for at least 24 hours, the longer the better.

To be honest, I always have coconut milk in the fridge for spontaneous actions like this pudding.

If you can buy coconut cream, you can also use it instead of coconut milk.

If you want to make the vegan semolina porridge without wheat, you can use something like spelt semolina. You should find this in every well-stocked supermarket in Europe.

In Germany I like to use spelt semolina as an alternative to wheat.

I have to say it is difficult to find spelt products here in the States, and sometimes I miss them quite a bit.

You can easily prepare the lactose-free semolina pudding in gluten-free. I recommend that you use corn grits or polenta. So you get a great creamy semolina alternative that tastes in no way inferior to the classic semolina porridge.

If you don't want to use coconut, you can of course use another alternative to prepare a creamy semolina pudding in vegan.

For one, you can use homemade cashew cream. I mix cashews and water in equal parts in a high speed blender. Add unsalted and raw cashews. These are tasteless and make a dish very creamy.

You can of course also use another vegan cream. For example oat cream, soy cream or any other you prefer.

Mix the cornstarch with 2 tablespoons of water. Now add these to the strawberries and rhubarb while stirring so that the compote thickens.

Serve in a bowl. Pour the semolina pudding in first and then the compote on top.

Can I prepare the vegan semolina porridge in advance?

You can keep the Pudding in the fridge very well. Just note that the porridge becomes firmer when cold.

Put the pudding and some extra vegan milk in a saucepan and slowly heat the semolina porridge. Don't forget to stir.

I would say yes. But I haven't tried it myself. Since the semolina porridge is prepared quickly, I usually prepare it fresh.

To freeze the semolina porridge, simply freeze the porridge in portions in a freeze-proof container.

Let the semolina thaw in the fridge overnight. And heat it in a saucepan with a little milk as described above. So it becomes creamy again. 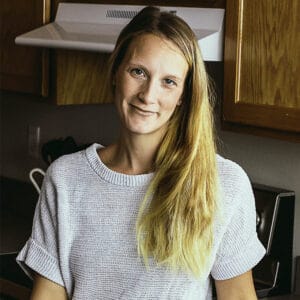